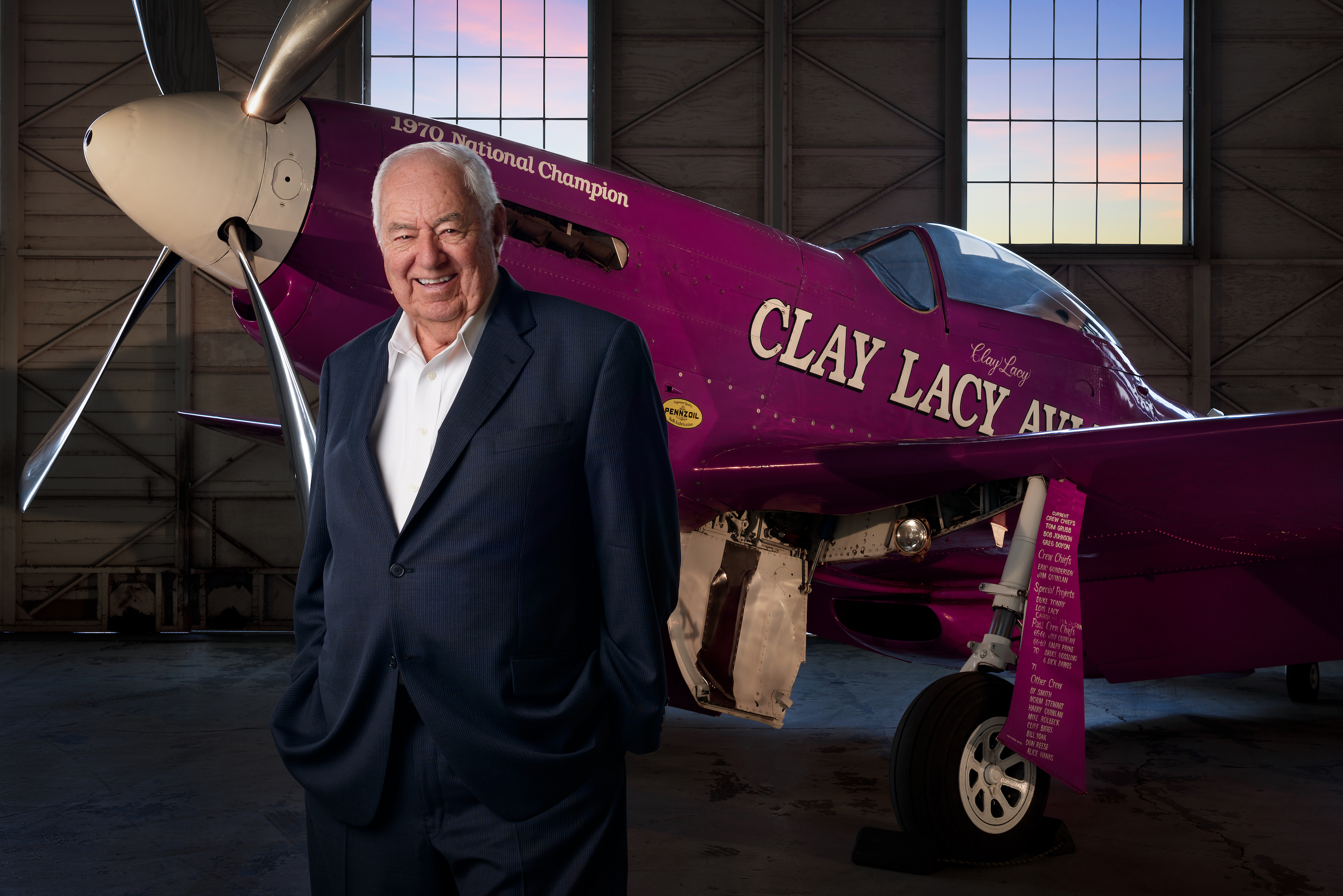 In 1953, Clay joined the California Air National Guard at Van Nuys Airport, where he flew the F-86 fighter jet and became the officer in charge of instrument training.

In 1962, Clay and fellow Air National Guard pilot Jack Conroy, founder of Aero Spacelines, made the first test flight of the Pregnant Guppy, a Boeing 377 Stratocruiser modified to carry the Saturn rocket booster in support of the nation’s space program to put man on the moon. Overall, he has made first flights in five new or heavily modified airplanes.

In 1964, Clay flew the first Learjet into Van Nuys Airport as a demonstrator for Pacific Learjet, distributor in 11 western states, shaping a new era in corporate air transportation and mobility.

Four years later he founded Clay Lacy Aviation as the first jet charter and executive jet management company on the West Coast, now recognized as the world’s most experienced operator of private jets.

An acclaimed aerial cinematographer, Clay helped pioneer development of the Astrovision camera system he has utilized to film over 2,000 projects, including movies such as “Flight of the Intruders,” “The Great Santini,” “Armageddon” and “Top Gun,” and nearly every airline commercial featuring air-to-air photography ever produced.

Clay was the 1970 National Unlimited Air Race champion flying his P-51 and holds 29 world speed records, including a 36-hour, 54-minute, 15-second around-the-world record in 1988 flying a Boeing 747SP that raised $530,000 for children’s charities. He has flown more than 300 aircraft types, logged more than 50,000 flight hours and accumulated more miles flying jet aircraft than anyone on Earth.

In 2010, the Federal Aviation Administration presented Clay with a Wright Brothers Master Pilot Certificate in recognition of his aviation expertise and safe operations for over 50 years. The same year, he was inducted into the National Aviation Hall of Fame for his legendary achievements as an air pioneer.

Clay Lacy has achieved worldwide acclaim for his indelible and lifelong contributions to aviation, and is the recipient of many other prestigious honors and awards.

Explore the aircraft that played a significant role in Clay’s career.

“LUCKY ME: The Life and Flights of Veteran Aviator Clay Lacy.”

“My whole life has been luck,” Clay Lacy says. With a forward by Neil Armstrong, and dozens of exclusive photos, this highly readable book by Stacy T. Geere reveals the talent, inspiration, dedication and entrepreneurial spirit behind Clay’s success.

Gain insights into one of the major figures in U.S. aviation history, his groundbreaking achievements and unique contributions to the private jet industry. You will appreciate quotes from aviation luminaries, such as astronaut Gene Cernan, and anecdotes about entertainment figures like John Travolta, Johnny Carson and Frank Sinatra.