As a pilot who flies in oceanic regions, particularly the North Atlantic routes and in Europe, you’ve probably heard about the new future air navigation system, or FANS. Initially it may seem like a technical issue. In fact, FANS-equipped aircraft offer well documented business advantages: saving time and money. One, the other or both are probably important to you and your boss.

FANS-1/A is the name of the satellite-based avionics systems developed by Boeing, Airbus, Honeywell and others, designed to increase the number of aircraft that can operate safety and efficiently in a given airspace. The system allows air traffic controllers to reduce the separation between the various aircraft in that airspace to lessen congestion. Two key benefits of the FANS-1/A compliant aircraft are added efficiency and increased safety, both of which address operational and business needs.

As an owner, when thinking about upgrading your aircraft to be FANS-1/A compliant, you should think about where you fly and the age of your plane. Flying the oceanic regions, specifically in the North Atlantic, means only aircraft specifically equipped will be authorized to fly FANS routes. This image illustrates the International Civil Aviation Organization’s (ICAO) Minimum Navigation Performance Specification (MNPS) Airspace, and the implementation phase-in is as follows: 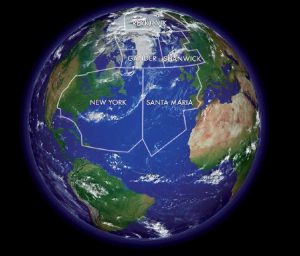 Phase 2A. As of February 2015, FANS-1A is required in all aircraft operating in the North Atlantic OTS (Organized Track System), FL350 to FL390 inclusive.

Phase 2B. As of December 2017, FANS-1A is required in all aircraft operating in North Atlantic MNPS Airspace FL350 to FL390.

Phase 2C. As of January 2020, FANS-1A is required in all aircraft operating in North Atlantic MNPS Airspace FL290 and above. As you can see, in the not-toodistant future direct flights between North America and Europe will require FANS-1/A capabilities.

While many of the newer corporate aircraft and all airline traffic flying the OTS are already equipped, legacy aircraft wishing to operate in the MNPS area may be in for a costly upgrade. One of the major questions is if the aircraft is currently equipped with a FANS certifiable Satcom System. If not, this is where TrueNorth excels with its Simphone Data Link Unit, a relatively low cost FANS over Iridium satellite system.

Owners and operators should also consider this: a flight deck with FANS-1/A capabilities helps reduce crewmember workload. The system allows operators and air traffic controllers to communicate using a textbased interface rather than by HF radio voice transmission. Sound quality of HF radio can be poor. Simplified textbased communication reduces communications errors and misunderstandings, and removes language issues like accents. FANS-1/A automatically provides aircraft position reports to air traffic control, eliminating the flight crew’s requirement to give manual position reports by voice. These capabilities help lower crewmember stress and help them operate the aircraft more efficiently. In the end, FANS-1/A contributes to increased safety, and there’s always a business case for that.

At Clay Lacy we’re experts when it comes to FANS-1/A implementations. Visit claylacy.com or call us to learn more.